Last week, Tableau announced the release of Tableau 9. This new release touts “smart meets fast” and focuses heavily on helping users visualize big data, while improving the speed with which users can analyze that data. 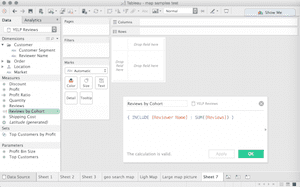 In addition, the company says it has completely rewritten Tableau Server and Tableau Online to help users share findings and collaborate with data.

We’ll take a look at some of the new features of Tableau 9 below.

Tableau 9 allows users to “think with their data” by simplifying the ability to experiment and apply analytic techniques. This will allow users to quickly uncover trends and insights. Here are a few of the improvements to Tableau’s visual analytics.

One of the benefits of Tableau’s latest release is its improved speed. Tableau 9 improves the data connection experience and expands support for data sources, allowing users to get and stay connected to the data they need.

Are you getting the most out of your Tableau investment? BlueGranite can help. We plan, design and build solutions using Tableau technology, and can help you scale self-reliant BI in your organization. Let us know how we can help you get the maximum ROI from your analytics technology. Contact us today to learn more.  Or, if you are interested in trying Tableau for yourself, click here for a free 14-day trial of Tableau Desktop.